5 Ways Drivers Can Protect Themselves Against Bully Truckers 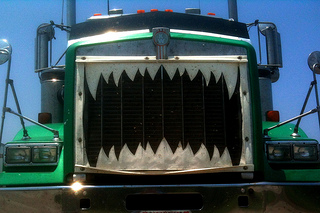 Accidents between tractor trailers and passenger vehicles are on the rise and so are injuries and fatalities connected with these crashes.

Since many businesses depend on trucking companies to deliver their merchandise to customers, truckers face deadlines for hauling cargo to specific destinations. While most truckers follow the rules of the road in the course of their job, some exhibit bad driving behavior and pose dangerous risks on the highway.

According to statistics from the Federal Motor Carrier Safety Administration (FMCSA), the governmental agency that oversees the nation’s trucking industry, the number of fatal traffic crashes in which large trucks were involved was 3,341 in 2011. This was seventy more fatalities than the previous year. The number of injuries resulting from truck crashes was 60,000 in 2011, 4,000 more than the previous year.

The March 2013 report of the FMCSA also reflected a rise in the number of traffic crash victims. In 2011, 88,000 people were injured in traffic crashes involving large trucks. This is 8,000 more than the year before.

Other FMCSA studies show that passenger car drivers were at fault for crashes more often than truckers. On the other hand, truck driver fatigue and speeding were also factors in accidents involving large trucks.

Bullying doesn’t always happen in school, it happens on the road, too, with truckers who drive recklessly in order to intimidate other drivers. There are truck drivers who move into the center lane of a highway to tailgate passenger vehicles.

Because a tailgating tractor trailer is intimidating, the driver of the passenger vehicle will often moves over into another lane. This big rig driver may continue tailgating until the he/she is free and clear of all smaller vehicles.

There are also truck drivers who get into the farthest left lane, pass up a line of cars, then suddenly move into the center lane, nearly cutting off the driver. The trucker does this with the assumption that the car in the center lane will give the truck the space it needs to change lanes.

There are Rules for Truckers, too

All commercial truck companies and their drivers are subject to the rules and regulations of the FMCSA. For instance, South Carolina has its own statutes and codes regarding different types of trucks operating in the state.

The State Transport Police, a division of South Carolina’s Department of Public Safety, investigates all accidents involving trucks. Truckers are considered legally negligent or reckless if it has been found, after an investigation, that they have violated both state and federal laws. In this instance, a truck accident lawyer in Columbia SC is the best course of action when faced with an accident of this nature.

A trucker whose bad behavior results in an accident faces legal consequences, particularly if injuries or fatalities are involved in the crash. Commercial truckers are either independent operators who own the tractor trailer or are employed by a trucking company that owns the truck. When filing a legal claim, both the truck driver and the trucking company can be named as defendants.

If you have been injured in a traffic crash involving a tractor trailer, you may be entitled to compensation from the commercial trucking company or the driver’s insurance company. Consult an experienced personal injury attorney who can assist you in filing a claim.