The Inevitability of Fractured Sibling Relationships in Dysfunctional Families

Recently, I found myself sitting with a patient Elsa, who was crying inconsolably in my office. It turns out that her sister had stolen her inheritance out from under her. It wasn’t the loss of the money that was making her feel so devastated, though; it was the shocking betrayal by her only sibling.

Elsa’s sister Joyce had gotten their dying mother to change her will at the last minute, leaving everything to her. Their mother had been ill for a long time and Joyce had found a way to convince her that Joyce and not Elsa was the daughter who really needed and deserved the substantial inheritance.

During our session Elsa kept repeating, over and over, “I don’t understand how she could have done this. I don’t understand why!” Although they had never been close and in fact, had only seen each-other at family gatherings for the past several years, Elsa didn’t think that there was any animosity between them; certainly not enough to cause Joyce to do such an awful thing.

Despite the fact that Elsa was utterly confused by her sister’s behavior, I understood it all too well, as it was representative of a pattern of sibling behavior that I’d observed many times before. I have heard dozens of similar stories where one adult sibling turns against another, horrifying the person who never would have expected their sibling to stoop so low. The betrayal was almost always having to do with money or inheritance, and it always arose from a particular type of family dynamic.

Elsa and Joyce had grown up with parents who were intensely involved in the successful family business and very neglectful toward them both. From early on, the girls had had to learn how to fend for themselves. Elsa was older than Joyce by two years and had taken almost a parental role with her, helping Joyce with her homework and listening to Joyce’s hopes and fears. Despite this, they weren’t really close while growing up; having very separate activities and groups of friends.

When they married, they grew even further apart but were always cordial when they saw each-other at family holidays and events. This is why Elsa was so surprised by Joyce’s seemingly inexplicable behavior around the will. What Elsa couldn’t know is how the siblings of dysfunctional families tend to end up at odds with each-other.

A dysfunctional family is one in which there is either abuse, neglect or both going on. The adults may not get along and might expose their children to terrible arguments or even physical fights. Conversely, the parents might be allies who care for and protect each-other at the expense of their child

In a dysfunctional family, the parents are inadequate or abusive. As a result, there is not enough love available for the children. Sometimes there’s no love at all. This sets up an unconscious competition between the children for whatever love might be available. During childhood, one child might ingratiate themselves to one or both parents in an attempt to get some attention from them. They are simply doing their best to survive in an environment deficient of the emotional necessities of life.

Joyce was one of these children. Despite professing to Elsa on numerous occasions how much she despised her parents, around them she was sweetness personified. Elsa had a different way of coping, preferring to find emotional support from her teachers at school, her friends and her extended family.

When they grew up, Joyce maintained more of a close connection with her parents, while Elsa had moved to a different city and had pursued fulfillment in her new family and in a meaningful career.

What Elsa didn’t realize, as she was getting on with her life, was that Joyce secretly resented her for having received more than her fair share of their parents’ love. Although this was in no way true – neither girl had received any love, really – Joyce had convinced herself that since she hadn’t been adequately loved, Elsa must have been the one receiving all the love in the family.

Psychologically, this phenomenon can be explained by the fact that even for an adult, it’s extremely painful to face the truth that your parents didn’t love you (enough). It’s easier to blame your sibling, accusing them of taking all of the available love and leaving you with nothing. Paradoxically, it’s the individuals who were doing their best as children to curry favor who most often feel this way, as opposed to the ones who were looking for emotional fulfillment elsewhere. 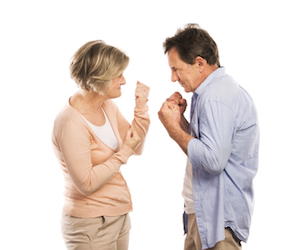 In a dysfunctional family where none of the children are getting their emotional needs met, there is often one child, like Joyce, who tries their best to get their parents to pay more attention to them. This child

sets up a competition between themselves and one or more siblings. Even if the other siblings are unaware of the competition, they’ve been entered into it by default. Every time the actively competitive sibling (Joyce) feels deprived of love, she imagines that her passive competition (Elsa) has stolen it from her.

The problem is that no matter what, currying favor with the parents is a no-win proposition: if the parents ignore the child then she feels even more hurt and deprived of love; if the parents do give the child more attention the child nevertheless feels deep-down inside that still, there is no actual love coming to them but rather, attention born of parental self-interest.

Joyce had (consciously or unconsciously) decided that since she’d never experienced parental love despite all her attempts to obtain it, Elsa must have taken all of it. The resentment percolated within her over many years until their father had passed away and their mother lay dying in her hospice bed. Elsa hadn’t visited very often because when she did, her mother talked only about how wonderful Joyce was. It was clear to Elsa that she and her mother had no relationship and apart from doing the right thing by visiting her occasio

nally, Elsa had no interested in spending time with a virtual stranger.

No matter how much their mother praised Joyce and ignored Elsa, however, Joyce felt like the deprived child and saw Elsa as the “spoiled” one. Elsa, on the other hand, because she had given up on getting any parental love years ago, didn’t feel like she was competing with Joyce, and although somewhat estranged from her, felt no resentment or hostility toward her sister.

Paradoxically, the child who is more able to recognize that her parents don’t have enough (or any) love to give is the one who ends up somewhat better off, because they’re not constantly frustrated in their attempts to get it, and aren’t expending energy, vying with their sibling(s) for it.

When her last remaining parent was dying Joyce went into a panic. The prospect of losing her mother also meant losing her last chance to finally attain parental love. Her anxiety quickly turned to desperation, and her brewing resentment toward her sister finally erupted in her betrayal of Elsa.

Money most often is the substance which becomes the substitute for parental love, and it was no different for Joyce. At the prospect of losing the chance of ever receiving her mother’s love, she unconsciously transferred her need for parental love onto the need for parental money. In her desperation for love, Joyce found a way to talk her mother into giving her the money. Taking all of it was meant to psychologically remedy her feelings of deprivation and jealousy toward her sister.

Unfortunately, this too is a no-win situation. Elsa feels deeply hurt and even more disconnected from her sister, and Joyce, whether she realizes it or not, will never find happiness or fulfillment with her mother’s money. In reality, there’s no way that it could compensate for the love that was never there.

In a dysfunctional family where the natural resource of love is scarce or absent, the children end up in a competition by default for this necessity of life. This turning of erstwhile allies and best friends into competitors is sadly, the inevitable outcome of the dysfunctional family, and the classic low point usually comes when the last chance for love is about to disappear.

In a panic, the actively competitive adult child (in this case, Joyce) enacts a terrible betrayal upon her

passive competitor (Elsa), stealing the money which has come to represent the lost love. The betrayal serves to destroy whatever tenuous connection might have been there, alienating the siblings forever.

This tragic outcome demonstrates that the legacy of the dysfunctional family is not just the emotional trauma caused by parental abuse or neglect but also and significantly, a toxic disruption of the normal loving bonds that siblings would otherwise share.